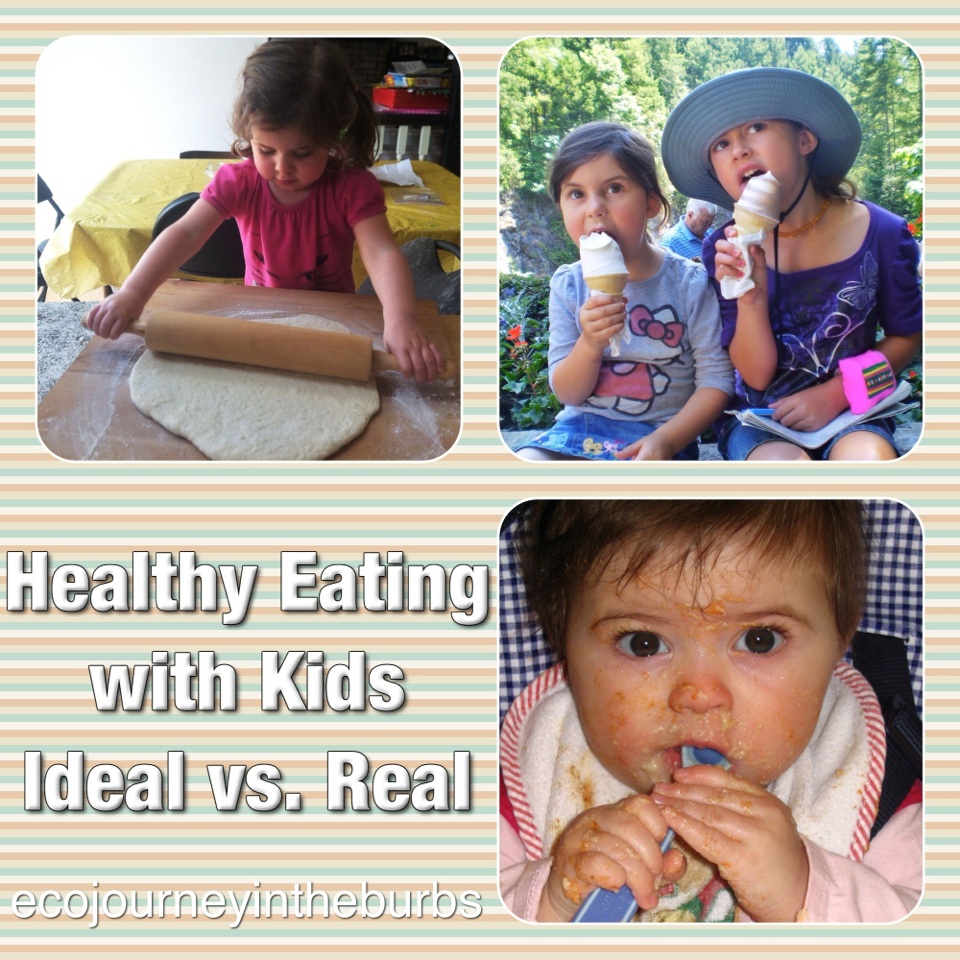 Before having kids my husband and I would talk about the way we wanted to parent our children. I had definite ideas about our values and the kind of family life we wanted. We were ready to change our life for our kids and we were going to embrace it whole-heartedly. I wanted to live by natural parenting ideals such as extended breast feeding, bedsharing and cloth diapering. My children would be exposed to a wide variety of organic whole foods because fussy eaters were created, not born. We didn't want to over schedule our lives so that our kids could spend hours exploring, creating and yes, getting bored. We wanted them to make mistakes and learn naturally from them. My children were also not going to watch television until well out of the toddler years.

As a teacher I also believed that some structure and boundaries were important. We would have family meals together every night. My children would participate in the family by helping with daily jobs around the house. There would be natural consquences and they would understand that they were responsible for their actions.

While I have been able to realize many of my parenting ideals, there is one key area (besides no tv) in which I failed miserably - healthy eating.

I was determined to feed my children only the healthiest organic food and I spent hours reading about and making food for my oldest daughter. I felt frustrated because she didn't show any interest in solid food until about nine months old, which seemed late to me. Little did I realize that she would be my earliest eater. My second and third daughters were much later in starting solids. My middle daughter would not eat anything at all until 12 or 13 months old. My third daughter was really late, as in nothing, not even a little mouthful, until 18 months old (and she was very small - 3rd %ile on the WHO breastfed growth charts, so major momma anxiety). Looking back, I wish I had known more about child-led weaning (child-led introduction of foods) and let them take the lead. I supposed I did end up letting them take the lead but being more informed about it would have cut down on my stress levels.

So I am living proof that fussy eaters are definitely born, and this simple fact has caused me a great deal of angst. The reality that I only had control over what foods I put in front of my children, not what they would eat, was devastating. With my first daughter I had rules about what she could and couldn't eat. With my younger two I was begging them to eat anything. I put foods in front of them that would have made pre-child me gasp. I remember begin ecstatic that one of them would eat a potato chip. One of them found an old chocolate egg in the couch? Hooray! She ate something without crying!
Mealtimes have been pure torture, even worse sometimes than bedtime (which were a special hell all on their own, of which pre-child me would be so judgemental). All of us sitting down to a pleasant meal together? How about being happy if my husband or I could eat a warm meal without children running around the table, playing with toys while eating, yelling or crying? Bribery and threats became part of our mealtime routine. "I won't be a short order cook," became, "please just tell me what you'll eat and I'll make it for you." Oh yes, pre-child me is giving me the side-eye right now.

So now I am having to undo all the horrible bad habits that we developed, such as actually eating at mealtime. My youngest was so fussy for so long that we would chase her around with snacks all day long to get her to eat. Now she expects food on demand and won't wait for even five minutes for a meal. She gets in the car or waits for a sister at an activity and thinks it means snack time, probably more out of boredom now. She is getting better at trying new foods but my middle daughter is absolutely opposed to trying anything new.

I know all the things I should be doing and I have read many blogs and books on ways to get kids to eat healthier. I have been to a paediatrician and dietician and have read all the literature they gave me. I have tried almost everything, with varying degrees of success, and I have certainly had advice bestowed upon me by anyone and everyone. Cue the judginess of other people and their perfect child/grandchild/friend who ate homemade organic sprouted heritage grain flatbread with bean spread and any vegetable because they were cut up into bite-sized pieces and served in muffin tins. If only I had introduced them to food this way they wouldn't be fussy. Or on the other end of the spectrum, if we  had just relaxed about the whole thing and put anything in front of them, like hamburgers, french fries and pop then they wouldn't be so fussy.

Now that my youngest is getting older I have more time to cook healthy whole food meals again. I am trying to include them in growing our own food and cooking so that they will be willing to try them, but it is very hard. For example, one daughter loves chicken noodle soup, which until recently has meant processed food. Now I am making my own soup stock and noodles, but she has been unwilling to eat it because it doesn't taste like the overly salty canned soup with MSG.
Slowly, though, I am making inroads and having success getting my kids to eat whole food meals and non-processed food. My oldest likes homemade sushi and kale chips, will use my homemade almond milk on her cereal, will eat quinoa and is open to trying new foods from around the world. It's just going to take (much) more time and patience with my other daughters.

I just wish pre-child me knew that I'm not a failure as a mother because I have fussy eaters. It just means that my daughters are individuals and I need to treat them as little people with needs and preferences, not vessels for my parenting ideals.

Visit Code Name: Mama and Hobo Mama to find out how you can participate in the next Carnival of Natural Parenting!
Please take time to read the submissions by the other carnival participants: