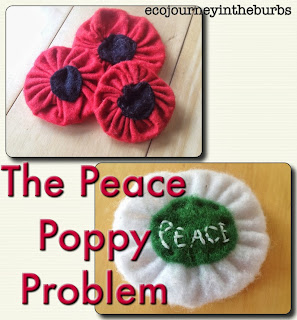 This post may get me into hot soup, and I am not the sort of person who thrives on conflict and controversy. I feel very strongly about this, however, so here I go...

A year ago I posted a tutorial for making reusable poppies for Remembrance Day.

My intent was to show how to make a poppy that can be worn year after year instead of the plastic flocked poppies distributed by veterans. As a teacher I get upset with all the discarded poppies I find around the school grounds and on the gym floor after the Remembrance Day ceremony.

Apparently people took issue with the fact that I wasn't supporting veterans by doing so. I am confused about how this could be the case, however, as I still donate at my school to the veterans' poppy fund even though I do not take a new poppy each year. 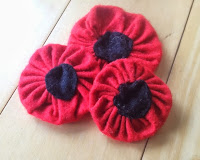 I find this very interesting, considering that I find traditional Remembrance Day ceremonies are already politicized. People speak of our soldiers who died for our freedom and our way of life. The poppy as a symbol dates back to the First World War and harkens back to the poppies growing between the crosses of the war dead in Flanders, Belgium, when a generation of young men died for very convoluted political reasons. Fast forward to World War Two, of course no one would argue that we would want to turn back the clock and let Hitler continue his mad march across Europe committing genocide, but what of all soldiers and innocent civilians on all sides who died? We only remember and give thanks for our soldiers? All wars are political and the decisions that lead up to war are political in their very nature. We must be careful when we speak of "just" wars, as if some are good and some are bad.

On Remembrance Day I think about the fallen soldiers, most of them young men like my grandfather (who served in the RAF in WWII) who volunteered because they believed the political justifications for going to war that the governments put forth at the time. I think about their faith and determination to do what they believed to be right at the time, and I weep for their suffering and loss. I remember all the wars that I have learned about and remember the horrific mistakes and acts that were committed in the name of a "just" war and hope that we have learned from history. 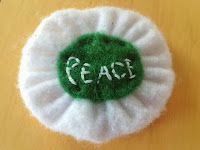 My grandfather, like many veterans who cannot speak of what they did and witnessed during wartime, never openly spoke of what he experienced during the war. He did talk of his angst about terror he caused innocent people in the cities he bombed nightly in Germany, which made him question everything he was doing.

However, it seems that all we as a society have learned is that we will not let terrorists and tyrannical leaders, as determined by us, have their way. So along with my red poppy of Remembrance, I wear a peace poppy in the hope that we have learned from the past and that we will work toward a better, more peaceful future. This may be terribly naive, as the political systems of the past have not changed and wars will continue to be fought in the name of freedom when really they are protecting a privileged elite's hold on money and power.

If soldiers made great sacrifices to protect the freedoms that we enjoy today, is not one of my freedoms to exercise my freedom of speech to promote peace by wearing a peace poppy? It is people's right to be offended by my points of view just as much as it is my right to express myself. I just fail to see how my peace poppy, in conjunction with my red poppy, can offend someone?

For a more intelligent and well argued discussion of the reasons to wear a peace poppy, please read this article.

I love how my school does the Remembrance Day ceremony. It is respectful of veterans who served in any war, respectful of the sacrifices that they made that they believed to be best at the time, while at the same time asking people to think about a better world with peace for all, regardless of where one lives. Students read poems and sing songs about peace, be it on the playground, at home or in the community. My favourite part is the parade of nations when our students represent their birth countries to show the diversity of our community, while at the same time showing how we are all the same.