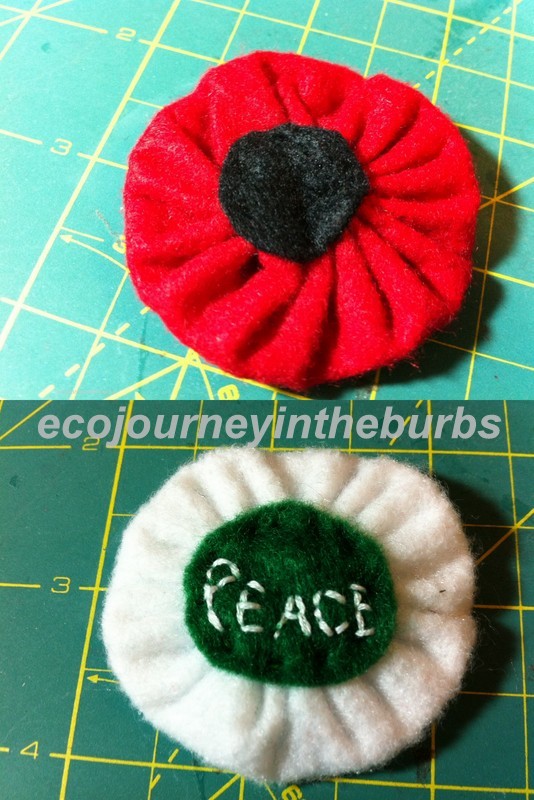 A few years ago I decided to make my own poppies for Remembrance Day, in honour of my late grandfather, who I called Poppy. He served in WWII in the RAF as a navigator. Although it was a pivotal time in his life (met and married my grandmother in England), he did not like to talk about the war or his part in it. All he would say to me each Remembrance Day was that it was tragic what each side did to each other, and that he always thought about the families in Germany living in fear and being injured or dying as a result of his bombing raids. He did not like to glorify the war or tell stories about the war (except to tell tales on himself - one involved a brick wall, a bicycle and a night of drinking). He did hint at some of the horrible scenes he witnessed, but on the whole he never participated as a veteran in Remembrance Day ceremonies. In many ways he became a quiet pacifist in his later years.

At this time of year when people remember the many sacrifices soldiers made, and continue to make, I like to also think about the innocent victims of war and victims of violence of all kinds. This year my students and I researched some current conflicts around the world and we had a discussion about how our world seems peaceful to us in North America. The world, however, is far from peaceful; we are removed from their lives that it doesn't have much impact upon us. Many of us are aware of the continued violence in Iraq, Afghanistan and Pakistan. How much do people in general know about the conflicts and violence in Sudan, Mali, Syria, Nigeria, Algeria, Congo, Palestine and Israel, and more. Also, there is the silent violence toward and mistreatment of workers around the world and slave workers in developing nations who provide us with the goods we want ?


When a good friend linked to this site (link) about wearing white poppies for peace (to remember all victims of war and its environmental destruction, as well as to seek peaceful ways to end conflict) I knew I had to make my own peace poppy (in above photo). I like to think that my Poppy would have liked one of his own to wear, and this year I will think of him as I wear my own peace poppy to my children's school's Remembrance Day assembly. For another well written article about white peace poppies, read this article.

It always bothers me to see the plastic flocked poppies after Remembrance Day discarded on the ground or lost. I wish they made the pins more like safety pins so they didn't poke my kids or fall out easily. My homemade poppies have safety pins attached to the back.

Here is my step-by-step tutorial for creating felt poppies: 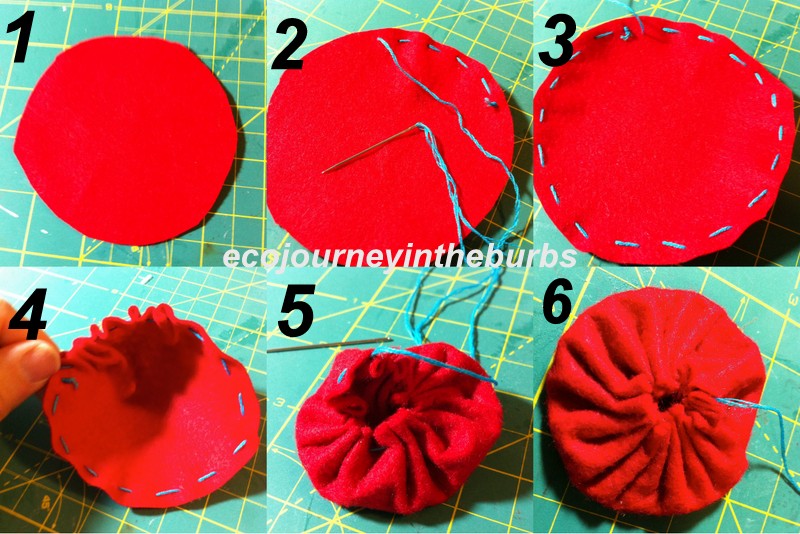 1. Cut out a circle shape in red, or white for a peace poppy. I tend to eyeball things (I'm allergic to measuring in general) so I cut a circle that is approximately twice the size of the flower I want to create.

2. After knotting the end of the thread, use a running stitch, go around the circumference of the circle about 5 mm from the edge (don't go too close as the felt may break when the stitch is pulled in step 4 and 5). I used blue thread so it would show up in the photo but I usually use thread to match the fabric colour.

3. In step 3 the whole circle has been stitched. Do not tie off the end.

4. Gently start pulling on the thread so that the felt begins to gather.

5. Continue pulling on the thread until the whole circle has been gathered in the centre.

6. Reshape the flower and gently flatten it until it takes a flower shape. 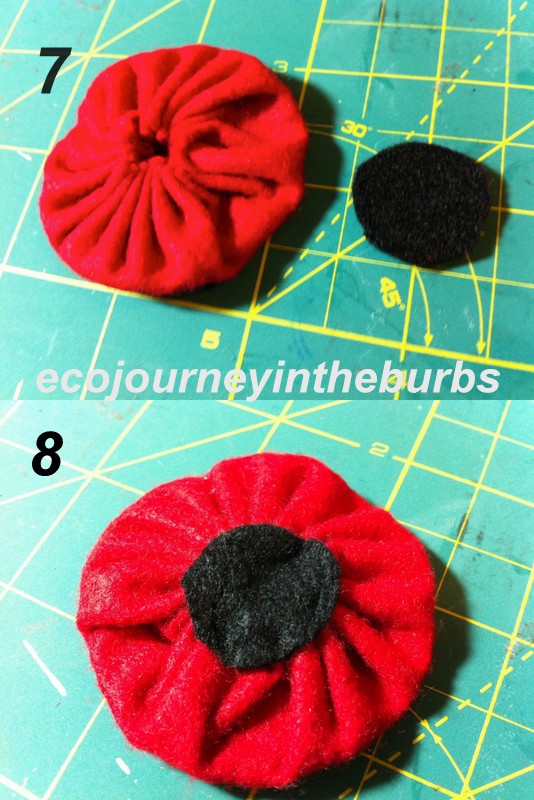 7. Cut another smaller circle out of black felt (or green for the peace poppy). Sew the small circle onto the flower. It could also be glued on. If I were feeling especially crafty I could sew black beads onto the black centre. For my peace poppy I embroidered "PEACE" onto the green circle before I attached it to my white poppy. 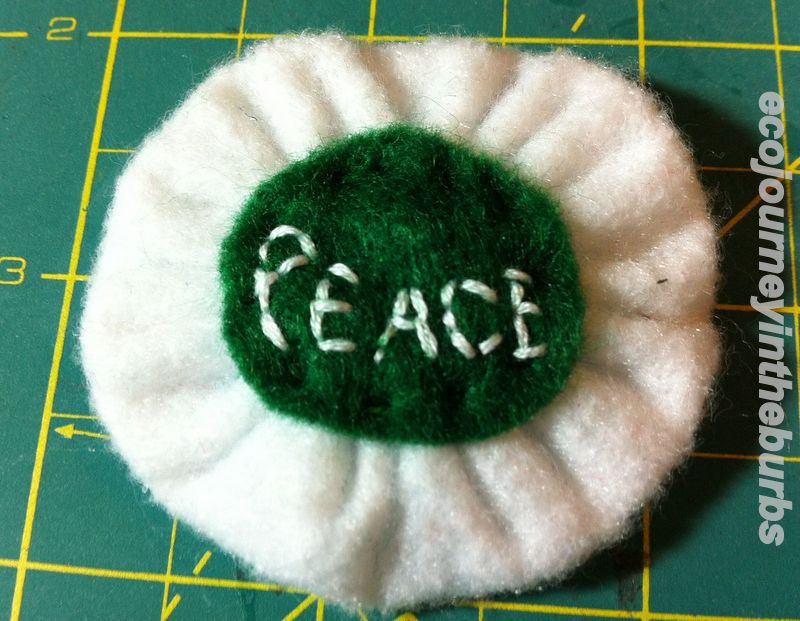 8. This is the completed poppy.

9. At this point I sometimes sew a safety pin to the back, although I am a lazy crafter and my peace poppy is currently attached to my coat using a safety pin coming through the inside of my coat. 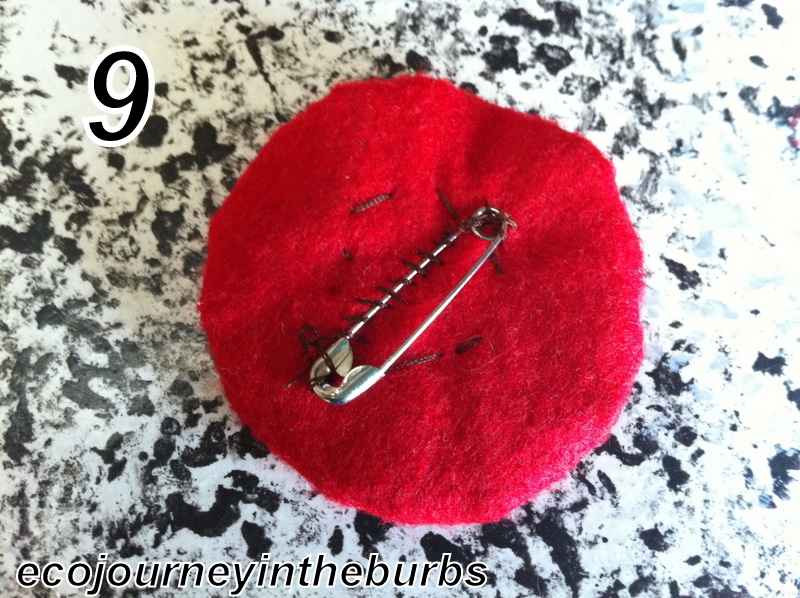 I'm wearing my peace poppy this year hoping for a more peaceful future for all on this planet.

A year later and I find it interesting the negative press that the Harper government of Canada is giving to peace poppies. I won't go into all the reasons they give for "disrespectful" the white poppies are because it makes my heart rate go up and I don't need that right now. Since posting this a year ago around Remembrance Day I have heard very strong opinions about why I shouldn't be wearing a peace poppy, as well as why I shouldn't be making my own poppy and reusing it each year.

While I was prepared for the former opinion, I was wholly unprepared for the latter. Apparently I am not being supportive of veterans when I make my own. However, I donate to the veterans' red poppy fund each year at my school so I am still unclear how I am hurting veterans. I stand by my opposition to the waste of discarded poppies lying around on school grounds. Furthermore, I believe that the values of my country, the very values that veterans fought for, guarantee me the right to express my values and opinions.

This may ruffle feathers, but in my opinion most Remembrance Day ceremonies seem to almost glorify war, with a jingoistic edge. The soldiers sacrificed and died for my freedom. They fought so I can live in peace. But civilian casualties and deaths on either side of a conflict often far outnumber military deaths, and these innocent people did not volunteer their lives for any cause. Are their deaths meaningless? We honour soldiers but say nothing of the other casualties, be they environmental, animal or human.

I love how my school (where I work) does the Remembrance Day ceremony. It is respectful of veterans who served in any war while at the same time asking people to think about a better world with peace for all, regardless of where one lives. Students read poems and sing songs about peace, be it on the playground, at home or in the community. My favourite part is the parade of nations when our students represent their birth countries to show the diversity of our community, while at the same time showing how we are all the same.