A Love of Bikes: Update

It is now December and the Vancouver rain has fully arrived for the winter. This makes it challenging to get fresh air exercise. Sure it's just water and it will dry. I'm not afraid of the weather by any means, but Vancouver rain is cold and cuts to the bone.

Generally I'm game to be outside year round regardless of the weather. Because I don't have a gym membership I have to get outside for my exercise. 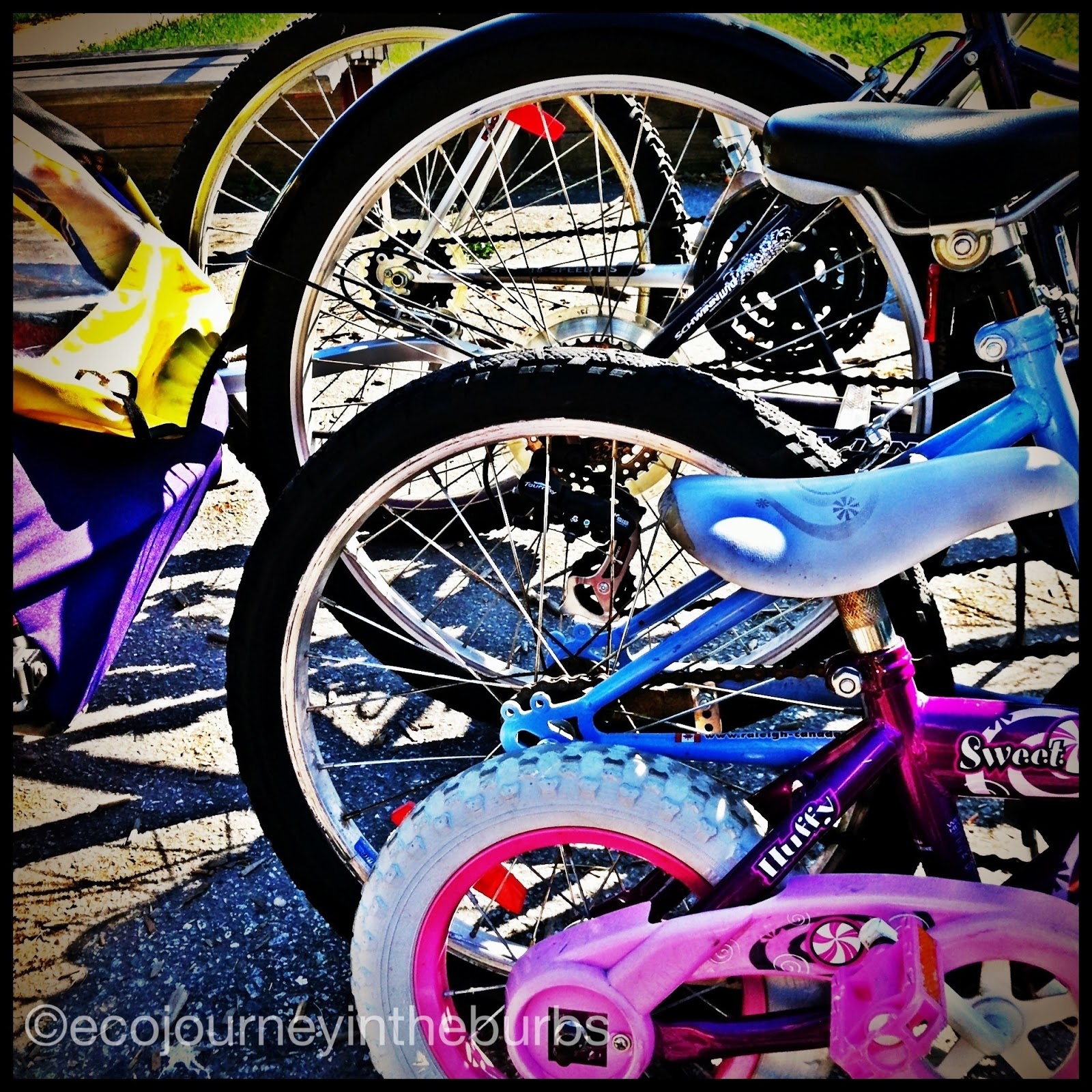 Back in September I stated my intention to get out on my bike more, to do more than exercise on my bike (link). I wanted to increase the amount of time I use my bike to commute for daily life. I wanted to leave the family car in the driveway more.

I knew that it would get more challenging to stick to this as the fall and then winter weather returned. With the shorter days of winter I would need more safety equipment such as reflective vests and lights. I said that I was going to be kind with myself if I struggled with this because changes and habits take time.

We had beautiful weather in September and October and keeping me off my bike was the problem. Who wouldn't want to ignore the growing piles of laundry and dishes and hop on a bike for a ride to Garry Point Park or along the Fraser River dyke? In the first month of my goal I logged over 100 km on my bike taking my kids to school and gymnastics, going to a meeting at work on my day off, going on scenic rides and grocery shopping. 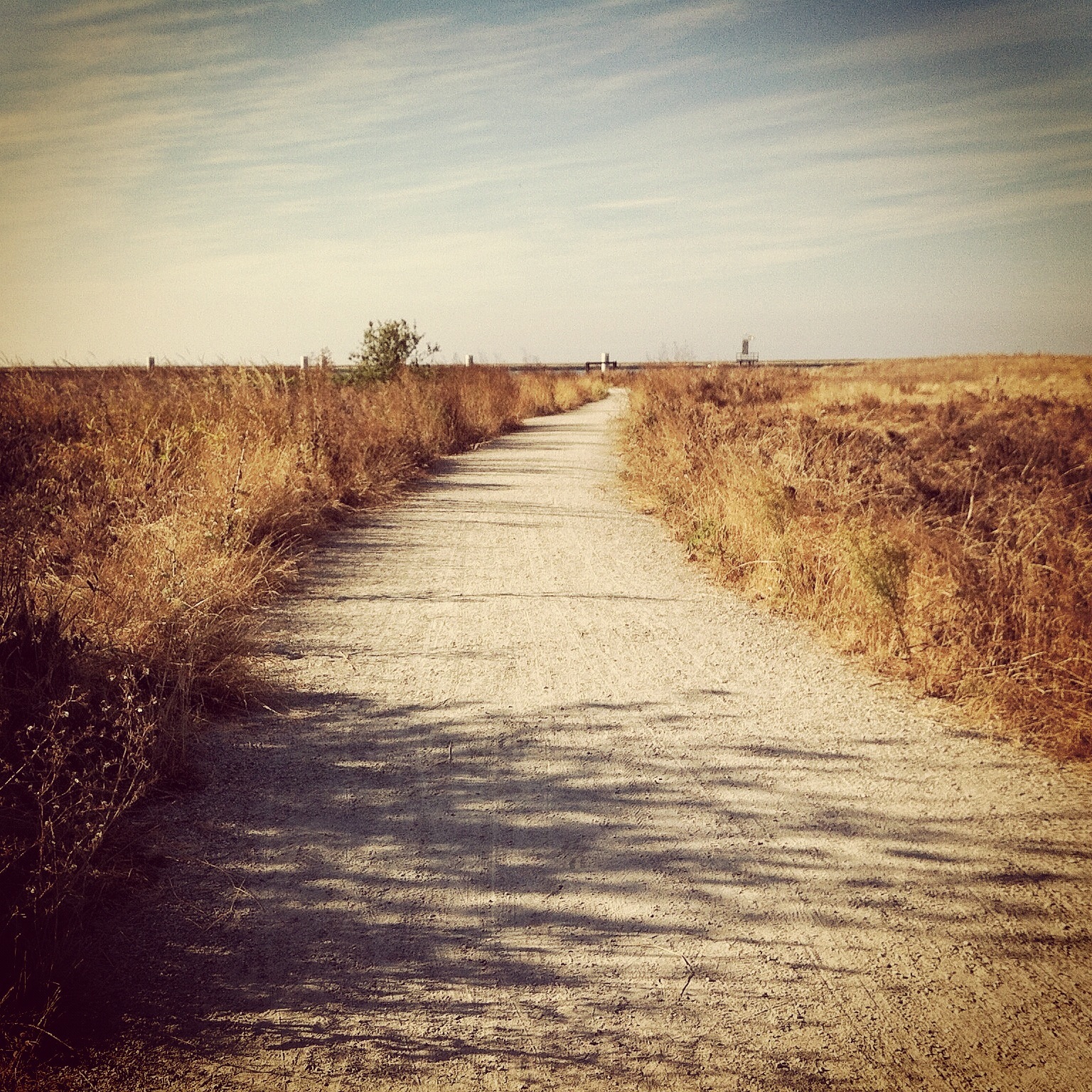 A lovely morning bike ride at Garry Point in Steveston

Toward the end of October my work picked up and I had more errands to fit in. I began dropping the preschool pick up each week because it took almost an hour for the round trip. Then as the days grew shorter and the rain picked up I dropped the rides to and from after school activities. 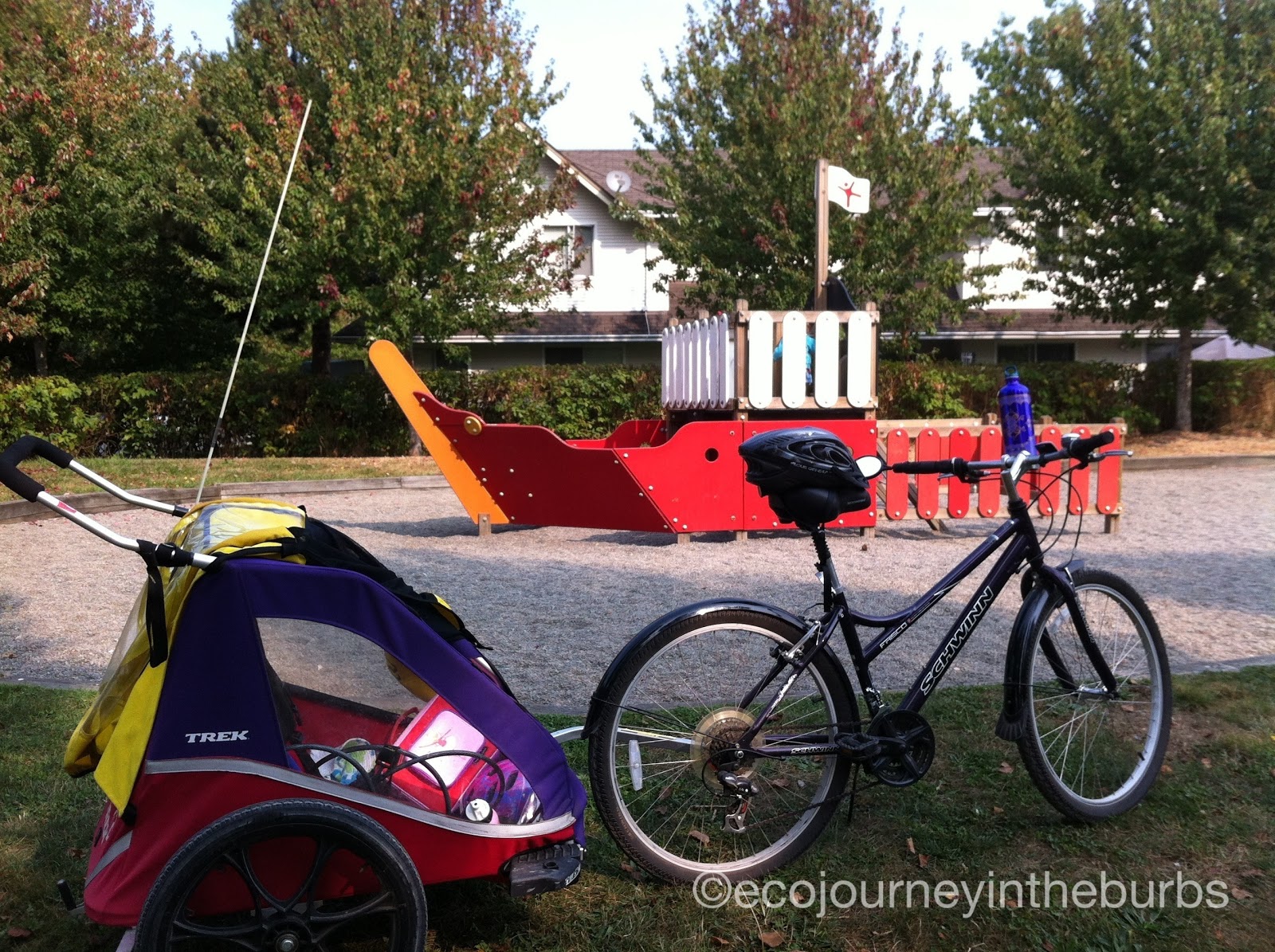 Having a little play at a park waiting for big sister to finish her gymnastics class.

Into November, as I began writing report cards (which equals a full work week of overtime), I jumped into the car for quick trips that I could do easily on my bike because I was stressed and short on time with all my obligations. 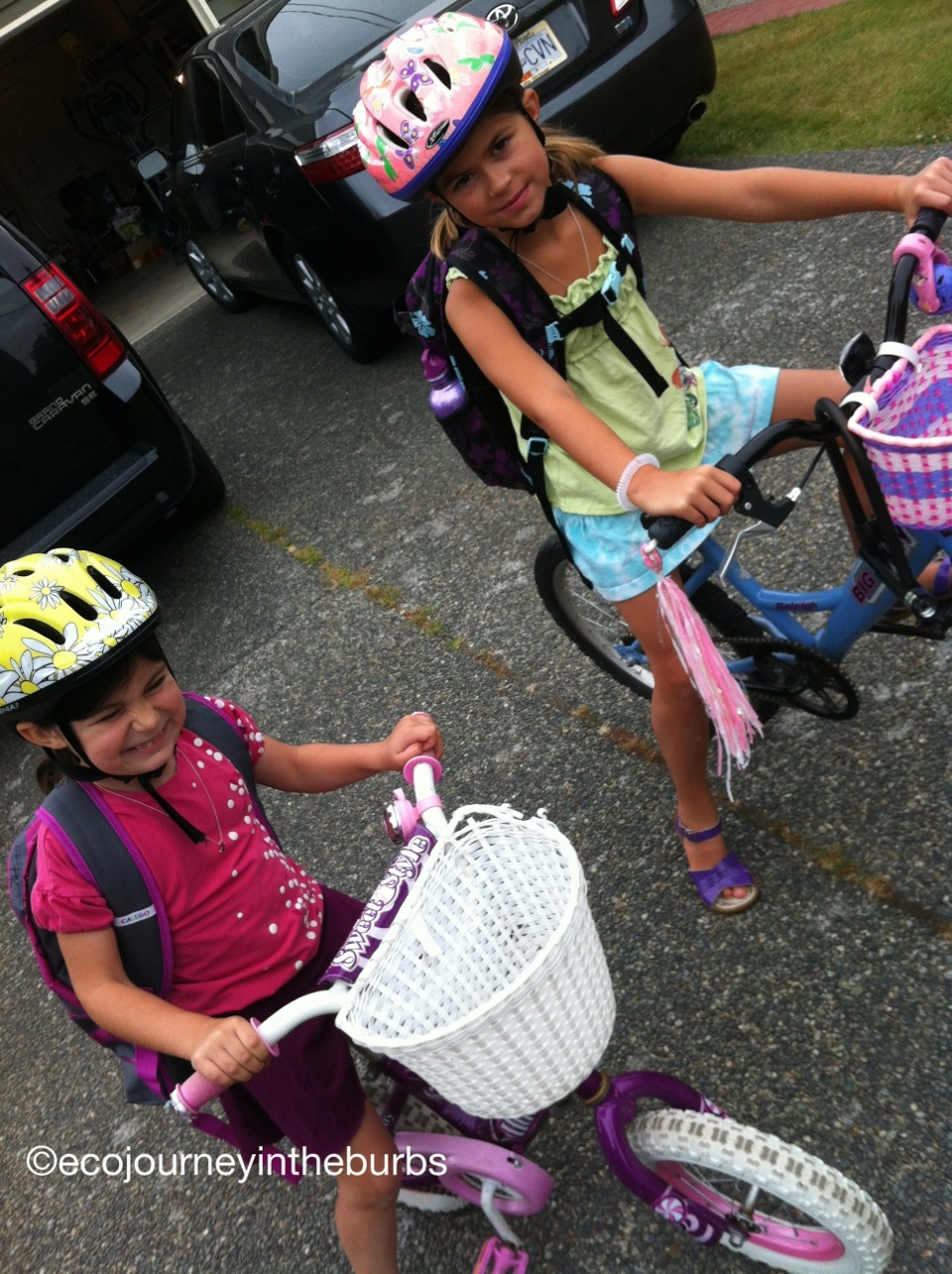 It wasn't until the past couple of weeks that I began cutting back on the amount that I walked or rode bikes to school with my girls. I went from 12 km per week to less than 5 km per week for daily school trips. I am finding it so much easier to throw everyone in the car when the rain is coming down in buckets. It's funny that I am taking the path of least resistance for the morning school run because growing up getting a ride to school was a treat saved for snowy days only. All other days of the year, rain or shine, warm or cold, I rode my bike. In the suburbs there just isn't a bike culture that may exist in more population dense areas. There are perhaps a dozen bikes locked up each day at the bike racks at school. In fairness though, many families walk to school.

I have been feeling the difference of the reduced physical activity. Obviously I am having to fill up my vehicle a more frequently because I'm using it more. My stress levels are increased (that thing called my job has certainly contributed as well). With the weather change my daughters are less inclined to ride their bikes or walk, which may have something to do with how cold their hands and faces get when they ride in the biting rain. They're lucky we slept in this morning or I would have tortured them with riding to school in the rain. My sleep patterns are more disturbed and I am finding that I am less rested in the morning. You know that feeling when your alarm goes off and it feels like you've just closed your eyes? Weight loss was never my reason for doing this but my clothes are obviously tighter, which makes me uncomfortable, dissatisfied and worried that I will have nothing that fits me soon with all the seasonal eating coming up.

We find the time for things that are important to us and we make excuses for everything else. It was beginning to feel like I was making excuses for the choices I was making, rather than doing what I valued.

This has been bothering me and I was determined to make some changes once things settled down, which they did this week. On my first day off, which was yesterday (I job share 50%), I looked out the window and saw blue sky! I didn't feel exhausted and it felt like the stars were aligned perfectly. Unfortunately I cannot get everyone to school and preschool on time on Wednesdays without a car, but I was determined to do the preschool pick up on my bike. It also helps that the preschool teacher told me last week that my youngest daughter called out for me when someone rode by on their bike. That settled it!

The ride to preschool was perfect. I had an amazing tailwind that made me feel like a super hero speeding down the road. The cool December air felt refreshing. I made up my mind to go on an even bigger bike ride today. 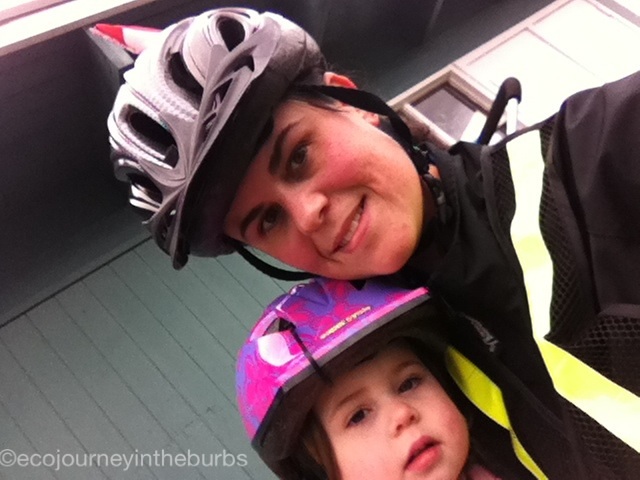 At preschool pick up this week. It was cold but dry and I felt great.

The ride home, however, almost killed me. I forgot that if I had a tailwind going it meant I would have a headwind coming home. I was riding into the wind coming off the Fraser River for a good portion of my ride and I had the additional weight of my little one in the bike trailer. As well, my underused muscles seized up in the cold while I waited for my little one to be dismissed from preschool.

Even though I had boundless energy when I got home, which is what I love about building activity into my daily routine, by the evening my thigh muscles feel like I hadn't been on my bike in years. Surprisingly I don't hurt today, so that's a positive.

For inspiration over the coming months I am going to read more of The Velo Family Diaries (link), a blog written by a Vancouver mother, who along with her cycling advocate husband, has made the decision to live car free and bike ride everywhere with her two young children. I found them via Instagram and the cycle chic photos he posts (he is @cbruntlett on Instagram). If she can do it everyday here on the Wet Coast, certainly I can do it a few times a week.

I believe in honouring the seasons and our connection to them. At this time of year we tend to stay indoors more and nest with the shorter days and longer nights. Cross your fingers that the weather isn't too wet for me over the next few weeks so I can settle into my new-old routine of biking more. I know that if I can make it through the winter doing at least a minimal amount of biking then I can make this goal stick year round.
Posted by Christy at 13:33