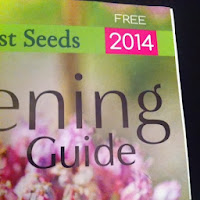 In the last week of December I received a 2014 seed catalogue from a local seed company, and when I saw it my heart skipped a beat. This meant that I can begin to think about my garden for 2014 in earnest. I can dream about what I will grow in my new garden. It may seem early to be thinking about the coming growing season, but many seeds can be started indoors in late February or early March, and last year I missed the window for some of the early varieties.

The new year naturally is a time to reflect on the year that was and look ahead to goals and plans for the coming year, but I don’t like to make specific and definite statements because I feel like a failure when I don’t follow through. Instead, I like to have intentions, which at least in my mind is different from resolutions.