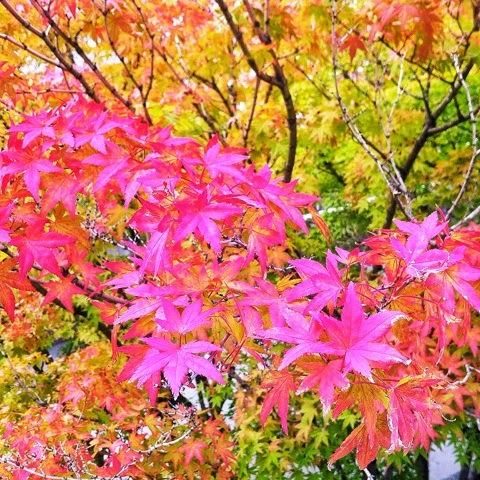 Tomorrow will be the first day of autumn and I am looking forward to the official end of summer. I feel alive during the summer and I revel in all the outdoor activities we can easily do during the hot months, but like many people, autumn may be my favourite season. This year I have more reasons to say good bye to the summer than in previous years.

The leaves have begun to show their first blush of autumn. On the eve of what should have been the first day of school we spent time at my old alma mater, Simon Fraser University, and enjoyed the beautiful leaves.

We are fortunate here in the pacific northwest because we can often have an extended summer in September and a long autumn with cool, crisp mornings and warm afternoons well into October. We make up for it in November with the famous Vancouver rain.

While the intense growing season of the summer has all but ended, I like to extend the backyard harvests with colder season growing. In fact, last year I harvested various Asian greens and kale on December 1st.

I began planning and organizing my fall garden back in late July and early August when I started seeds in a mini shelf greenhouse unit in my backyard. I had to finally say goodbye to the summer and yank up some plants to make room for the new ones, which was hard.

At the moment my garden beds are looking a little shaggy as I wait for the remaining sunflowers and cucumbers (which as still producing).

four varieties of kale
bok choy
sui choy (Chinese cabbage)
leafy lettuce
spinach
turnips
chard
cauliflower and cabbage (for the spring)
garlic (to be planted in October)
parsnips (very hard to germinate; out of two dozen seeds I have three seedlings so far. I don't have high hopes that they will survive)

* This is my first year not growing Brussels sprouts. In the past I have harvested some for Thanksgiving dinner and the rest for Christmas dinner, and now I am regretting not growing them.

I have plans to build hoops and cover two of my beds with plastic when we have regular frost. I was able to harvest through mid fall frosts last year because we had a warm season and the frosts were intermittent. However, once winter hit we had to wait until late January before the kale was defrosted and edible again. I am hoping to have kale through to the spring with covered beds, as well as cauliflower next spring.