The growing season is quickly coming to an end. I can feel the nip in the air in the morning and evening, and we have to remember to take a hoodie or light coat when we head out the door. As much as I will miss summer, I am excited about the changing colours of the leaves, the smell of pumpkin spice and pulling out my favourite sweaters again. We are crazy for Hallowe'en in my family, which is a close second to Yule and Christmas. If I were being honest with myself, I think autumn may be my favourite season.

But I am sad to say good bye to my veggie garden for another year. This was my second summer with full garden beds in a backyard (container gardening in our townhouse in years prior) so I am a newbie and don't think of myself as a gardener yet. But I am starting to get my "sea legs" and figure things out through trial and error. 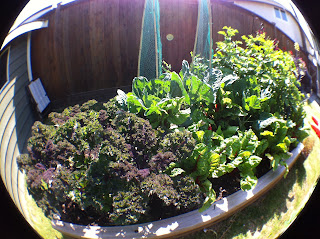 One of the raised beds in mid July.

After following some urban farming blogs I am starting to get the idea that I need to keep a journal of the season to remember what grew well, what didn't do well and why, any problems I encountered and any changes for next year. So that is what I hope to do with this post! 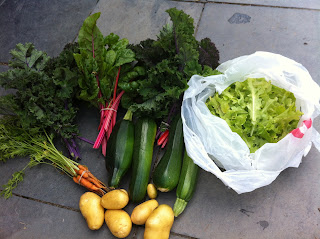 This is what we gave to our neighbours several times throughout the season. 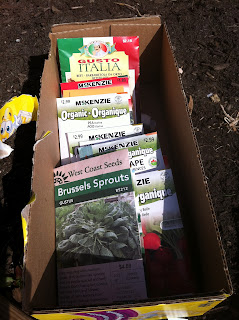 Some of the seed packets I used.

One of the things I loved about growing my plants from seed is that it was immensely satisfying watching each and every plant sprout and grow taller and stronger. My daughters and I would check on them daily and talk about what the seeds looked like, perhaps why some sprout sooner than others, and why some didn't sprout at all. We had great conversations about optimal growing conditions, and what happened when a section of seeds and seedlings were overwatered or didn't get enough light. It was an amazing learning opportunity for all of us to see the seedlings, which all looked pretty much the same as initial sprouts, begin to differentiate into the various plants, and we had fun trying to identify them without looking at the labels on the pots. 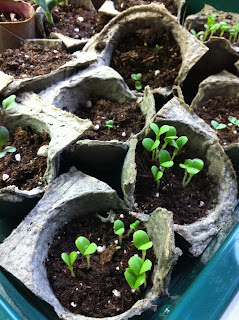 My wee babies, I mean seedlings.

The other thing I loved about growing from seeds is that this time I really felt like they were my plants. In fact, they were like my children and I felt pride and joy as they grew stronger and began to yield food for us. Conversely, I felt sad when some died because I planted them outside a little too soon and when some struggled after some heavy rain. I felt far more invested in them compared to the plants I have purchased. 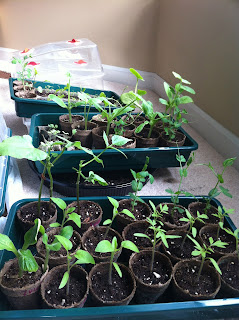 In the foreground are the tomato plants, then peas, beans and squash in behind.

Next year, however, I will not grow herbs from seed. I have had difficulties with this in the past but thought I would try again. My basil never fully thrived and it had a very bitter taste throughout the season. Perhaps it didn't get hot enough for it at a crucial point in its growth (we had a chilly, rainy spring).  I don't seem to be able to kill my chives and green onions though. The chives were given to me from a neighbour a couple of years ago and my green onions were started years ago. 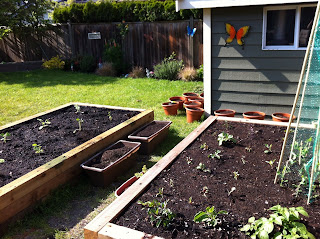 Shortly after planting the newbie plants. On the right side you
can see the peas which should be much taller by this point.
I planted them too late.

I believe that turning the soil in my garden beds with steer and chicken manure in early April really made the difference for healthy and full plants. Last year our neighbour built the first raised bed for us (we are so lucky) and I'm not sure the soil was the best quality, especially after seeing the difference this year when my neighbour added another raised bed to our yard but I bought the manure to add to both beds. I'm looking forward to using our own compost material next growing season. I wonder if I should still add some manure? Maybe I can get some from a local organic cattle farm? 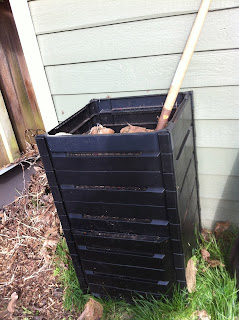 Our compost bin, purchased from the City of Richmond.

So what will I do differently next year? In addition to not growing herbs from seed (unless anyone can give me some helpful tips), I will plant my peas about a month earlier, and I will plant my pumpkins a month later. I will also put much more thought into planning where to put each plant. I was careful with spacing this year (major problem last year) but really, growing brussels sprouts next door to kale really wasn't bright. My poor cucumbers, which really weren't happy from the get-go (must read more about them) became swallowed by first the zucchinis, then the pumpkins, which were threatening to strangle us in our sleep. 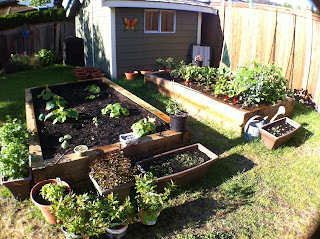 Tomatoes can be finicky here in our temperate west coast climate and once again they were a challenge for me. I usually buy my tomato plants already with tomatoes on them, but last year I had fun watching them develop from small three inch plants, so as mentioned previously, I tried them from seed. One of my tomato varieties was much happier than the other, at least for growing here in Steveston. The yellow grape tomatoes are ripening much more successfully than my larger red tomatoes. The larger tomato variety became stressed in mid August (or at least that's what my internet search results told me it means when the leaves flip over and curl) and I couldn't figure out why. Coincidentally the yellow grape ones are a heritage variety I picked up at the Foxglove Farm and Garden on Salt Spring Island, B.C. 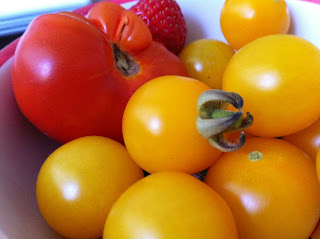 The first harvest of tomatoes that made it into the house.
We popped them into our mouths as fast as they ripened.

What other challenges did I face? My pumpkin leaves got a powdery mildew in August, which spread to the zucchinis. Other than slightly slowing down their growth and looking really ugly, I didn't notice any ill effects. The pumpkins themselves look great right now (fully ripe) and the zucchinis are still producing for us. 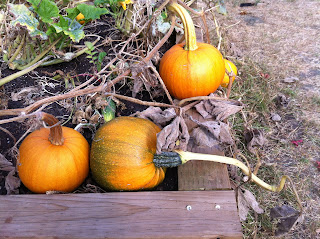 We have eight pumpkins in total this year.

I don't know if I will be able to sweet talk my neighbour into building us another raised bed next year (I'd like two more for my backyard and eventually some in the front yard), but regardless I want to plant more of the veggies my girls enjoyed eating this year: triple the number of peas (a huge favourite), beans and cucumbers; double the carrots, beets, spinach and radishes. I will half the number of zucchinis, chard and kale, mostly because we also participated in a local CSA: community supported agriculture  veggie pick up once a week and guess what they grew?!? Yup, each week we were inundated with zucchini (at one point I had over two dozen in my fridge), chard and kale from both gardens. Green smoothies anyone?! 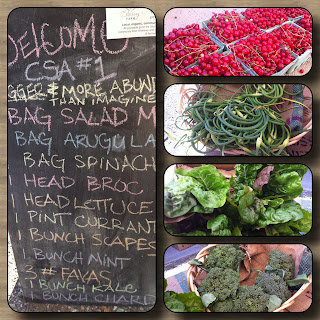 Our garden continues now with the brussels sprouts, which I am looking forward to harvesting at Thanksgiving in October, and possibly for Christmas dinner again. This past Christmas morning I was so proud to cut the last stalk out of my garden and cook it up for my family. 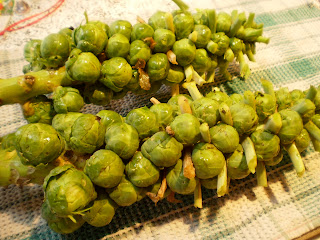 At a recent visit to the UBC Botanical Garden I purchased a winter gardening guide book which I am slowly working my way through; however I'm too late to do a winter garden this year. Hopefully next year I'll have plans in place mid to late summer to begin a winter garden. Perhaps it is a good idea to grow kale in the winter garden instead, along with some cabbage (which we missed this year) and other hardy veggies.

I'm sure I'm forgetting some other crucial bits of information I will need but this long enough and a lot to process.

Do you have a backyard garden? Do you container garden? What have you learned this year?